Every 3rd Thursday of the month we reserve the stage for Women, Trans, and Queer folk though everyone is invited and encouraged to come enjoy the show. These Open Mics are always special. Donations directly benefit this community-supported space. Signups for performance at 7:30 fill up quickly, and it begins at 8pm.  Bring your creativity and artistic inspiration. $3-7 at the door. No one turned away for lack of funds. 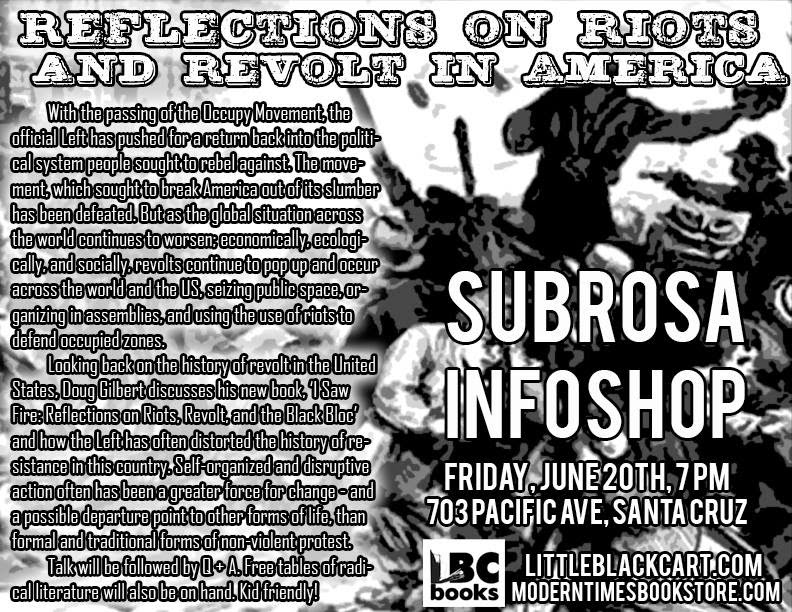 Reflections on Riots
and Revolt in America,

With the passing of the Occupy Movement, the official Left has pushed for a return back into the political system people sought to rebel against. The movement, which sought to break America out of its slumber has been defeated. But as the global situation across the world continues to worsen; economically, ecologically, and socially, revolts continue to pop up and occur across the world and the US, seizing public space, organizing in assemblies, and using the use of riots to defend occupied zones.

Looking back on the history of revolt in the United States, Doug Gilbert discusses his new book, ‘I Saw Fire: Reflections on Riots, Revolt, and the Black Bloc’ and how the Left has often distorted the history of resistance in this country. Self-organized and disruptive action often has been a greater force for change - and a possible departure point to other forms of life, than formal and traditional forms of non-violent protest.

Talk will be followed by Q + A. Free tables of radical literature will also be on hand. Kid friendly.


No money. No trades. Everything is free. This market is based on a gift-economy and thinks capitalism sucks. Bring food to share. Bring your special items that you don't use but can't throw away (ex. clothes, toys, art supplies, instruments, books and zines...your free box). Bring your special talents to offer people (ex. haircuts, message, reiki...). Come and take what you can use and say thanks! We will have folks to check in with as you arrive. First come first served, space may be limited.  If you bring things, you are expected to take away whatever is left at the end of the market.

And come visit SubRosa during our regular open hours!  We are making a concerted effort to be open regularly, even during the summer.  So, bring a friend, check out a book from the Anarchist Library, peruse the Meristem Health Distro, spark an engaging conversation and much more!

Also, here is another reminder to Support SubRosa
during our Spring/Summer Fundraiser!
You can donate to our secure page at EverRibbon, which collects the money through WePay. SubRosa is also fiscally sponsored by a 501(c)(3) non-profit, so your donation can be tax deductible.

And so you can donate HERE!