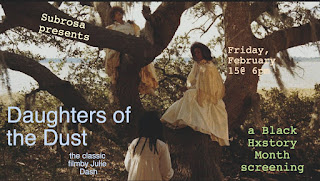 *Callow from Oakland, https://www.facebook.com/callowtheband/
**The Sun and the Mirror from Boise, ID --- https://thesunandthemirror.bandcamp.com/releases?fbclid=IwAR047ertR5yt6GYAgslPS-xs4IQlIWEZKJ2c9VOZgCDxJAzWTistaZrS5E4
***Reverend Stephan Sams

The FIRST EVER #FYWOC: Intersectional Resources film screening is finally happening–– in Santa Cruz!  A special screening of Julie Dash's classic film "Daughters of the Dust" (1991)

From Wikipedia: "Daughters of the Dust is the first feature film directed by an African-American woman distributed theatrically in the United States. Set in 1902, it tells the story of three generations of Gullah (also known as Geechee) women in the Peazant family on Saint Helena Island as they prepare to migrate to the North on the mainland." https://en.wikipedia.org/wiki/Daughters_of_the_Dust

Come in and work on making collages with artist Whitney Sparks and SubRosa collective member Randy. We will provide materials, but feel free to bring your own too! This is a monthly event.  https://www.facebook.com/events/289975461681784/

The Democratic Federation of Northern Syria (Rojava) is a shining example of hope amidst the Syrian Civil War. This documentary gives an in-depth look into the inner workings of the commune system of Rojava and how they work in practice.

Please Join Us For This Free Event!  Light refreshments will be provided and the film will be presented in segments to provide opportunity for discussion.  https://www.facebook.com/events/555700344947228/

Rojava Solidarity Santa Cruz is a local group of concerned citizens hoping to highlight the Kurdish question and support the growing Democratic Federation of Northern Syria, also called Rojava.  Any donations collected will be contributed directly to humanitarian efforts in Northern Syria.