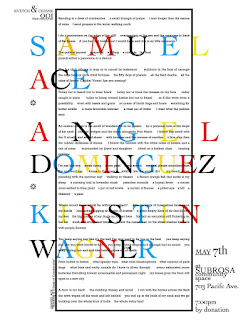 Samuel Ace is a trans and genderqueer poet and sound artist. He is the author of several books, including Our Weather O­ur Sea (Black Radish Books, 2019) and Meet Me There: Normal Sex & Home in three days. Don't wash. (Belladonna* Germinal Texts, 2019). He is the recipient of the Astraea Lesbian Writers Fund Award in Poetry and the Firecracker Alternative Book Award, as well as a two-time finalist for both the Lambda Literary Award and the National Poetry Series. His work has been widely anthologized and has appeared in or is forthcoming from Poetry, Aufgabe, Fence, The Atlas Review, Black Clock, Mandorla, Versal, The Collagist, Posit, Vinyl, Troubling the Line: Genderqueer Poetry and Poetics, Best American Experimental Poetry, and many other publications. He teaches poetry and creative writing at Mount Holyoke College and divides his time between western Massachusetts and Tucson, Arizona.

Kirstin Wagner is a writer, teacher, and PhD candidate in the UCSC Literature Department. Her research concerns inherited trauma in families organizing around domestic violence. Her creative work is published/forthcoming in Genealogy, Bombay Gin Literary Journal, Gesture Literary Journal, Something on Paper, and Amerarcana. She has taught creative writing at Naropa University, Indiana University, UC-Santa Cruz, and in the Boulder public school system. You can find her hiding fairies in the redwoods, writing at the beach at 3am, or eating pizza anywhere, anytime.

Angel Dominguez is a Latinx poet and artist of Yucatec Mayan descent, born in Hollywood, and raised in Van Nuys, CA by his immigrant family. He's the author of Desgraciado (Econo Textual Objects, 2017), and Black Lavender Milk (Timeless Infinite Light, 2015). His work can be found in Brooklyn Magazine, Dreginald, Entropy, Queen Mobs, The Tiny, The Wanderer, and elsewhere in print or on the internet. He's currently working on a book of poems, as well as the follow-up to Black Lavender Milk, Rose Sun Water forthcoming from The Operating System, in 2020.

*Sue and the and the Namies are a surf rock/ no wave group from Arcata, California that are bringing every delight and delicacy the great pacific garbage patch has to offer, directly to your ears, minds, and hearts. You can find their tunes here https://sueandthenamies.bandcamp.com/album/songs-from-the-great-pacific-garbage-patch


**Wet Spot are a garage rock band on tour with Sue and The Namies https://wetspot.bandcamp.com/
***Crocodile Tearz is a new local Santa Cruz duo group consisting of Rip Florence and Ethan Pezzolo. Their sounds could potentially be described as emotional mod podge twee inspired by laughable traumatic daily happenings.
****potentially there will be another band :)

VOUNA conjures a singular Cascadian Funeral Doom atmosphere that is unlike anything that has existed before.  Their self-titled LP will be released by Artemisia Records November 2018.  https://vouna.bandcamp.com


All music was composed and all instruments performed by frontwoman Yianna Bekris (previously of Vradiazei, Eigenlicht, and Sadhaka).  The music was inspired and influenced by Finnish funeral doom, English masters My Dying Bride, Eastern European black metal, and Greek folk music.

The album was recorded entirely at the Wolves in the Throne Room studio, Owl Lodge, which is located at the edge of an ancient forest in Olympia, WA.  Razor sharp tremolo picked guitars cut through the heart like a knife. Mournfully sung vocals and cinematic melodies are combined with crushing doom drums, while layers of primitive 90s digital synths create a lush and rugged soundscape.

Really Really Free Market! No money. No trades. Everything is free. This market is based on a gift-economy... capitalism NO! But come to the really really free market to give away your old stuff and/or get new-to-you stuff. Bring food to share.  Bring your special items that you don't use but can't throw away (ex. clothes, toys, art supplies, instruments, books and zines...your free box).  Bring your special talents to offer people (ex. haircuts, message, reiki...).  Come and take what you can use and say thanks!  We will have folks to check in with as you arrive.  First come first served, space may be limited. Don't be late and be sure to check in with the organizers when you get there. If you bring things, you are expected to take away whatever is left at the end of the market.   Note: We are shifting to 2nd and 4th Saturdays.  https://www.facebook.com/events/662467710875294/

SubRosa is in downtown Santa Cruz, CA which is unceded land of the Awaswas-speaking Ohlone people.