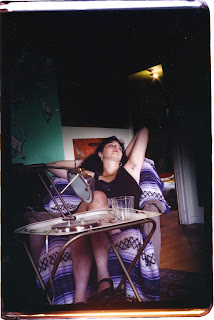 The Making of Amerikans

Restlessness defines the American spirit. Speaking to the “improvised character of American experience, historian and former Librarian of Congress Daniel Boorstin has said, ‘everyone [has] to be prepared to become someone else.”’ Like characters in a Gertrude Stein novel, we are living in the present progressive tense, existing in a continual state of becoming that’s both affirming and altering who we are. Celebrating such indeterminacy, these portraits treat identity as an activity, as something contextually situated, making for a seriously playful meditation on this generation’s selves.

Nicky Tiso was born and raised in Southern California and graduated from The Evergreen State College in Olympia, WA in June 2010 with a B.A. in Liberal Arts. There, he studied aesthetics and politics primarily through the medium of creative writing. His work has been published in XYZ, and he currently interns with Siglio Press, a new and independent press in Los Angeles dedicated to publishing uncommon works that live at the intersections of art and literature. You may follow his poetic self at nickytiso.blogspot.com.

Bryan May is a California native named after the guitarist of Queen. He’s currently a cat-lover, a late-night guerilla radio DJ, and is a great shoulder to cry on over late night burritos. His work is an intimate and anthemic exploration of West Coast punk/fringe culture from an insider’s perspective. His style is as youthful and exuberant as his subjects; it captures an attitude of resistance in the cross hairs of intoxication, where partying meets protest. Check out his bad website at www.restlesslegs.tk.

Chloe Minervini grew up in Cotati, CA, home of the annual accordion festival. She has an acute love for cats, burritos, and talking about feelings. When she isn’t busy reading the classics, making artisan espresso drinks, playing a wee bit of music or crushing on cuties, she is probably taking pictures that encapsulate her lust for life, liberty and the pursuit of happiness.