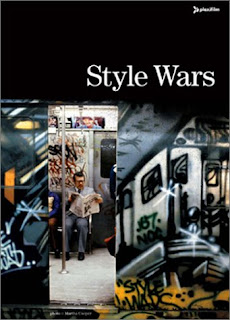 "Style Wars" is an early documentary on hip hop culture, made in New York City in 1983 by Tony Silver and Henry Chalfant. The film has an emphasis on graffiti, although breakdancing and rapping are covered to a lesser extent. Style Wars gives a view into the graffiti subculture (as well as urban New York City life in the 1980s), documents the stages of New York City Hip Hop, and posits that its members were a racially and ethnically diverse group of creative young artists, albeit being mostly African-American.

Come watch films with others, eat popcorn (as we will bring some, and we encourage you to bring snacks to share as well).

And after the screening we can share in a discussion as well.
$2 donation NOTAFLOF