Upcoming! Mon.- What Is Anarchism?/ Thurs.- pot-luck and conversation about the case of death row prisoner Bomani Shakur & More! 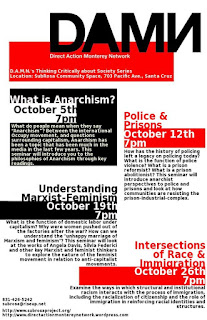 Every Monday at 7pm in October!
*Thinking Critically about Society Fall 2015 Seminar Series at SubRosa!*

We at SubRosa are thrilled to have folks from Monterey that are a part of The Direct Action Monterey Network (DAMN) come to Santa Cruz to host a series of discussions at the space.

"This series of seminar sessions has been put together to encourage the exchange of ideas, experiences, and knowledge surrounding a particular topic or theme. We believe that everyone can have something to offer to the seminars as we move through current debates in politics and different political and social theories."

*Monday October 5th at 7pm: What is Anarchism?*
What do people mean when they say “Anarchism”? Between the international Occupy movement, and questions surrounding capitalism, Anarchism has been a topic that has been much in the media in the last few years. This seminar will introduce you to the philosophies of Anarchism through key readings, and then use these philosophies to discuss current events.  SubRosa facebook event thingy for the series:  https://www.facebook.com/events/921367114604834/

In case someone wants to read up on it beforehand, the readings are posted online for free on their website here:
https://directactionmontereynetwork.wordpress.com/projects/thinking-critically-about-society/ 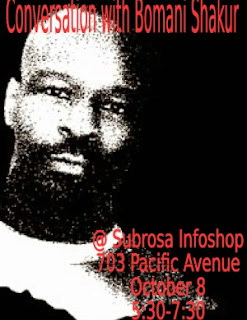 Thursday October 8th at 5:30pm-
Join us for a pot-luck and conversation about the case of death row prisoner Bomani Shakur.


Bomani will be joining in the conversation, calling in from is solitary confinement cell in Ohio's supermax prison.

Bomani Shakur (aka Keith LaMar), was framed for murder in retaliation for his role in organizing a resolution to the “Lucasville Uprising”, a 1993 prison rebellion. He was sentenced to be murdered by the state of Ohio. Last month he lost his final appeal. The government deliberately withheld evidence in Bomani's case, including another inmates confession to the crime Bomani was convicted for.

Food and conversation will start promptly at 5:30pm so that we can join in the call with Bomani in a timely fashion.

Please bring a place setting for yourself and a dish to share if you are able. More on Bomani's case at http://www.keithlamar.org/ and http://www.lucasvilleamnesty.org/ 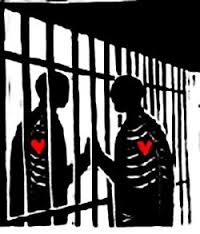 This is a place to write letters to prisoners.  Anyone is welcome to stop by and write a letter.  Pamphlets, letter writing material, info on penpals, & snax provided.  This is a good place for new penpals to jump in.  "Writing to prisoners is not charity, as we on the outside have as much to gain from these relationships as the prisoners." -NYC Anarchist Black Cross ltp@riseup.net

Saturday October 17th at 12pm-3pm-
Really Really Free Market:
No money. No trades. Everything is free.

This market is based on a gift-economy and thinks capitalism is terrible. Bring food to share. Bring your special items that you don't use but can't throw away (ex. clothes, toys, art supplies, instruments, books and zines...your free box). Bring your special talents to offer people (ex. haircuts, message, reiki...). Come and take what you can use and say thanks! We will have folks to check in with as you arrive. First come first served, space may be limited. If you bring things, you are expected to take away whatever is left at the end of the market. 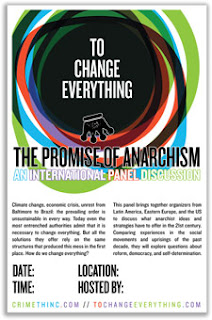 Thursday October 22nd at 6pm-
brought to you by folks at Crimethinc:


To Change Everything:
The Promise of Anarchism
An International Panel Discussion

This panel brings together organizers from Latin America, Eastern Europe, the Balkans, and North America to discuss the significance of anarchist ideas and tactics in the 21st century.

The participants will compare experiences from the wave of protests and uprisings that has swept the world since 2010—exploring the role of demand-based politics in both catalyzing and limiting movements, examining a variety of forms of repression, and critically evaluating experiments with direct democracy. They will conclude by assessing the prospects of contemporary struggles for self-determination in an era of globalized capitalism and state control.

All of the presenters are contributors to a recent outreach and dialogue project, To Change Everything, which appeared earlier this year in over twenty languages.  More info about the project is at http://www.crimethinc.com/tce/

And of course we have open hours on Wednesday (HUFF meeting 11am) and Friday (2pm-6pm) and when the gate is open!