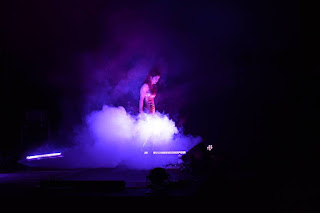 A rich, velvety evening of stimulating entertainment for the eyes, ears, hearts and minds. Come and see hypnotic, colorful images projected on real film. Listen carefully to complex lyrics (catch the jokes), simple drum beats, and soothing synthesized tones. Sense the space around you and feel it fill with fantastic, fleeting phantasms. Bring your friends and have a time.

Doors at 7:30, Show at 8pm. $7 donation, no one turned away for lack of funds! Show with support from the Santa Cruz Guerilla Drive-In.

Lyra Hill, artist and California native who has never before performed in Santa Cruz, will share some original songs, and the following:

*Breathe With Cube (2016), 12 minutes, 3D 16mm film and performance // Breathe With Cube is an optical illusion and live comedy trance intended to prepare an audience for total immersion into a cinema space, the 'white cube,' or the 'black box.' The audience fixates on a slowly pulsing cube which grows, shrinks, seems to stand still and split apart. This performance invites participation through vocal repetition and deliberate, expansive use of the imagination.
**It All Depends (On You) (2017-ongoing), performance // It All Depends (On You) is a site-and-audience-specific series of performances designed to provoke an audience into participating in some outsized emotion befitting the time and place. It might be silly, sudden, sad, scary, or something else. IAD(OY) was first performed on the roof of the Greek Film Archive in Athens, as part of documenta 14.
***Uzi's Party (2017), 30 minutes, 16mm film with sound. // In this experimental teen dramedy, five young women gather for a Ouija party on the anniversary of an important death. They gossip, bicker, and flirt until somebody becomes possessed. Uzi's Party was shot entirely in-camera on 16mm film and includes extensive analog special effects. Starring Jojo Hill.

Lyra Hill is an artist, educator, and radical priestess who specializes in creating celluloid films, alternative comic books, and immersive, multimedia experiences. She has been organizing rituals since 2004. She created, hosted and ran BRAIN FRAME, the legendary performative-comix reading series, from 2011-2014. She has screened, published, and performed in Canada, Mexico, Scotland, England, Australia, Italy, Greece and across the USA. In 2016 NewCity Magazine named her "Best Urban Ritualist." She currently lives in Los Angeles where she curates and hosts MULTI CULT, a ritual variety show.

From the facebook post: "After publishing more than sixty texts in multiple genres, Blind Field is releasing its first special issue in print. Our print issue, End/And: Gender, Labor, and Unending Times, will be on sale at our release party. Join us on Sunday, June 18, from 5-8PM at SubRosa (703 Pacific Ave), for readings from several Blind Field authors, snacks, discussion, and a screening of Lizzie Borden's 1983 film Born in Flames.

Blind Field: A Journal of Cultural Inquiry is an online journal of anti-capitalist and feminist writings about culture and contemporary struggles that started in Santa Cruz in 2015."

From the facebook post: "Join us for the first installment of 'Occupy Hip Hop' @ SubRosa Community Space, for a celebration of culture, revolution, life, and creation. We've got a packed lineup of dope local performers, a live community cypher, supplies for artists of all kinds to create, and a potluck style BBQ so bring something to share! (No Alcohol Please)

Event is by donation, no one turned away for lack of funds, and all ages are welcome so bring the whole family!

Respect, as always, is Expected.

- GRAFFITI ARTISTS -
There will be spray paint and board available so come through to connect with other artists, and spray free! (If you have paint, pens, or surfaces to spare, bring them to share)

We know you're out there, so bring the crew and show off a bit, get down outside in a sunlit garden with a live DJ providing the breaks on the 1s 2s.

Big love to Jay, Eanna, Bob, and Gabe for putting in work. Thank you Jessie for the beautiful flyer. Cheers to SubRosa and the community for making it all possible."

SubRosa is additionally taking on the Pacific Ave. storefront space adjacent to us from mid June - end of July to be used as a blank canvas for your projects and visions! Let us know if you want to use the space or have ideas!
Email us at SubRosa-events@riseup.net!
And check out SubRosa's online stuff for more info about what's going on!!!
(hip-hops shows & special ClubRosa happenings & much much more!)