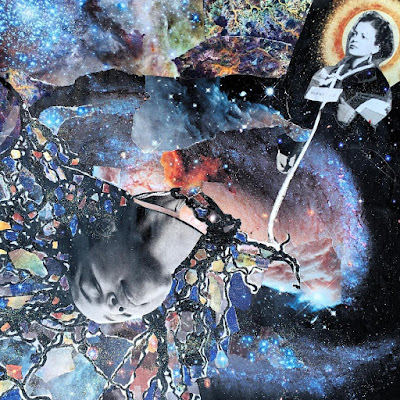 An Art Installation by Whitney Sparks

Ancient Future: The Noose as Umbilical Cord ~ this collection of mixed media artwork from 2018 explores the cosmic realm of ancestral knowledge as a powerful magical and/or spiritual force of Blackness that can land on Earth in healing shifting ways/waves for their descendants in the Diaspora.
Migrating Womxn ~ portraits of people traveling in the caravan made to uplift their struggle and above all to RESIST the dehumanizing agenda that threatens their lives. ALL proceeds from these portrait sales will go directly to support the caravan refugees.
Mixed Messages ~Collage postcards by yours truly from around the world. Get $5 off a yearly subscription to these original works of art for 2019 by ordering with the code SUBROSA via whitneysparks@gmail.com, before January 1.

The Noose is a portal to the future:

portal to a cosmic womb space,

as umbilical cord, connecting us to truth.

As a dance,
As a net, what would it catch?
The knitted nooses of our ancestors, gathered back together…
Could we ever hope to haul in a different future? Different from the bleak one projected now?
To Migrating Womxn ~ My heart calls out with the cry of a nomad mother who has not felt safe in her homeland. I honor the time travelers and families fighting for a brighter future every step of the way! The Spirit of the Universe lives through you… May you be safe and comforted.
Art show opening Friday, December 7th, 6pm