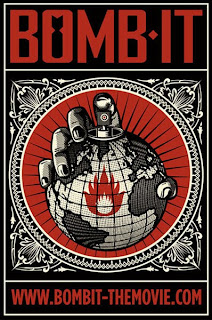 Bomb the System (2002) is a drama film written and directed by Adam Bhala Lough. It revolves around a group of graffiti artists living in New York City who decide to make a mark on the city. Bomb the System was the first major fictional feature film about the subculture of graffiti art since Wild Style was released 1982. Several well-known graffiti artists participated in the making of the film including Lee Quinones, Cope2 and Chino BYI. The film's score and soundtrack were composed by El-P.

Bomb It is an international graffiti and street art documentary. The film spans 5 continents and features cities such as Cape Town, London, Paris, Amsterdam and Sao Paulo, as the documentary explores the interplay between worldwide graffiti movements, the global proliferation of "Quality of Life" laws, and the fight for control over public space. www.guerilladrivein.org