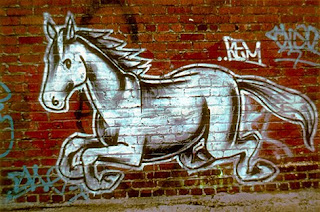 This Week at SubRosa, February 14th-20th

Piece by Piece documents the history of San Francisco’s controversial graffiti art movement, with a fast-paced journey into the world of San Francisco street art, as seen through the eye of the artists. Chronicling more than 20 years of creation and destruction — honestly, accurately, and critically, the film takes you alongside those who lived in what is arguably one of the most influential youth cultures of our time.

San Francisco’s graffiti style arose in the period from 1983 to 1993. Piece by Piece starts by documenting what laid the groundwork for today’s Bay Area graffiti: “Cholo” writing and the impact of PBS’s 1983 documentary, Style Wars. The film includes not only San Francisco’s graffiti originals, but also commentary from noted New York “writers” such as Seen, Cope 2, and Case 2. It also covers the tragedy of Dream One, a San Francisco graffiti pioneer and a vocal figurehead in Bay Area urban welfare activism.

From 1993 to 2000, San Francisco became an international magnet for ground-breaking graffiti styles yet to be seen in other parts of the world. The film elaborates on what it takes to establish credibility among the graffiti community, featuring classic works from KR and the horses of Reminisce; and documenting the creative expression of these and other “writers.” The film also features well-known graffiti artists such as Grey, Buter, Joro, Norm, and Barry McGee (Twist). review from: http://ishogun.com

With the Homeless People (Oakland) & Main St. Mouse (SC) & Shagbark Hickory (SC). A fun evening, dance around and bring some coins in your pockets to donate at the door ($5-NOTAFLOF).

We will be reading a zine every Sunday. Please join us for reading and discussion of the text. Feel free to bring snacks and such. E-mail WTFreading@gmail.com for more info and an upcoming reading list! **This reading group is limited to those folks who identify as women, trans and/or fem.

SubRosa is an anarchist community space run by a collective of committed volunteers. We put energy into SubRosa to create a vibrant community space available for events, classes, and meetings, collaborations and organizing, art and creativity, as well as reading and studying. We are working to create a world guided by mutual support, without coercive control.