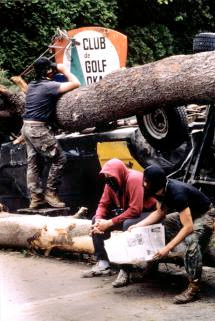 The Santa Cruz Indigenous Solidarity working group is excited to be showing four amazing films this month that highlight the struggles of various Native communities to protect their land and defend their ways of life. After each film we will give a brief update on the continuing work of the communities depicted, and discuss related struggles closer to home that are in need of support. Each film showing will be a fundraiser to support a specific indigenous struggle, and we greatly appreciate any donations you can give.

A powerful documentary of the 77-day armed stand-off over a burial site in Quebec that propelled native issues at Kanehsatake into the international spotlight.

This film documents the 1990 crisis when Native Americans of the Mohawk Nation blocked access to reserve land which was being appropriated against their will by the white community of Oka, Quebec, Canada. What this film shows is the initial incident and the resulting siege from the Mohawks point of view as an illustration how this is simply a result of resistance to 270 years of European racism pushing them around and leading up to this confrontation.