Oppose and Propose! Andrew Cornell, Sunday May 8th at 7pm 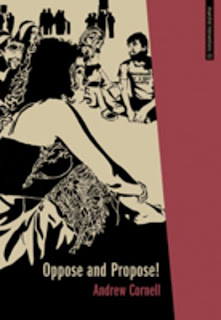 Oppose and Propose!
Lessons from Movement for a New Society

Reading by author
At SubRosa, Sunday May 8th at 7pm

Where do the strategies, tactics, and lifestyles of contemporary activists come from? Movement for a New Society, a radical pacifist organization active

in the 1970s and 1980s, pioneered forms of consensus decision making, communal living, direct action, and self-education now central to antiauthoritarian movements. Brimming with analysis, interviews, and archival documents, Oppose and Propose!: Lessons from Movement for a New Society recovers a missing link in recent radical history, while drawing out crucial lessons on leadership, movement building, counterculture, and prefigurative politics.

MNS served as a crucial organizational link between the movements of the 1960s and the post-Seattle global justice movement. Yet the group’s political innovations created tensions of their own. Members found their commitments to “live the revolution now” often alienated potential allies and distracted them from confronting their opponents, while their distrust of leadership and rigid commitment to cumbersome group processes made it difficult to keep their analysis and strategy cutting-edge. Oppose and Propose! fills an important historical gap, asking where the tactics, strategies, and even ways of living we take for granted today come from. Cornell answers that question in this concise collection of documents, which include an edited transcript of a panel discussion held with former MNS members, an interview with MNS founder George Lakey, and excerpts from two MNS pamphlets, as well as Cornell’s own long monograph on the history and legacy of Movement for a New Society.

About the author: Andrew Cornell is an educator, writer, and organizer living in Brooklyn, New York. He has been involved in labor, global justice, anti-prison, and other movements for over a decade. He teaches classes in labor history, social theory, and urban studies, and is completing a book length study of anarchism in the United States during the 20th century.