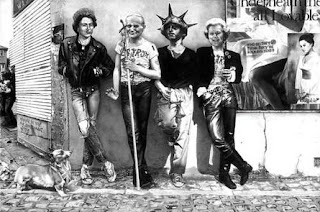 I first discovered anarchism through punk music, specifically through the band Crass.  This was the 1980s before the internet, and I would mail order punk and hardcore records.  I lived in the central valley, in the midst of the conservative Reagan years, and these records where a life line to other possibilities.  The packaging to the records was elaborate and the sleeves folded out into posters that were full of tiny type of an anti-authoritian nature.  And the music raged with a righteous fury.  Crass, Conflict and also U.S. bands planted seeds that would sprout for me later.  My experience has also been shared by many across the world.   Here is a short biography about Crass and afterwards a link to a documentary about the band.

Crass were an English anarcho-punk band, formed in 1977 and based around Dial House, an open house community near Epping, Essex, England.

In contrast to The Sex Pistols ‘anarchy’, Crass’ attitude was more directly influenced by libertarian socialist philosophy and anarchism’s nineteenth century roots. In the process they promoted anarchism as a legitimate political ideology, way of living, and as a resistance movement, popularizing the seminal peace punk movement and touching on such overtly political issues as anti-consumerism, direct action, feminism, pacifism, anti-corporatism, environmentalism, anti-globalization, anti-racism, religious power, and squatting.

Taking literally the punk manifesto of “Do It Yourself”, Crass combined the use of sound collage, graphics, song, film, and subversion to launch a sustained and innovative critical broadside against all that they saw as a culture built on foundations of war, violence, sexism, prejudice, capitalism, religious hypocrisy and unthinking consumerism. They were also critical of what they perceived as the flaws of the punk movement itself, as well as wider youth culture in general. Crass were amongst the progenitors of the anarcho-pacifism that became common in the punk music scene.

From their earliest days of spraying stenciled anti-war, anarchist, feminist and anti-consumerist graffiti messages around the London Underground system and on advertising billboards, the band had always been involved in political as well as musical activities. On December 18th, 1982, Crass coordinated a 24 hour squat of the Zig Zag club in West London primarily for an all day event attended by approximately 500 people to prove “that the underground punk scene could handle itself responsibly when it had to and that music really could be enjoyed free of the restraints imposed upon it by corporate industry”.

In 1983 and 1984 they were part of the Stop the City actions instigated by London Greenpeace that were arguably fore-runners of the anti-globalization actions of the early 21st century. Explicit support for such activities was given in the lyrics of the band’s final single release “You’re Already Dead”, which also saw Crass abandoning their long time commitment to pacifism. This led to further introspection within the band, with some members feeling that they were beginning to become embittered as well as losing sight of their essentially positive stance. As a reflection of this debate, the next release using the Crass name was Acts Of Love, classical music settings of 50 poems by Penny Rimbaud described as ”songs to my other self” and intended to celebrate “‘the profound sense of unity, peace and love that exists within that other self.” A further post-Falklands war hoax that originated from members of Crass became known as ‘the Thatchergate tapes’. This was a cassette featuring a faked conversation using edited recordings of Margaret Thatcher and Ronald Reagan’s voices, in which they appeared to allege that Europe would be used as a target for intermediate range nuclear weapons in any conflict between the United States and the Soviet Union. Copies were leaked to the press, and although put together totally anonymously, the British Observer newspaper was somehow able to link the tape with the band.

Crass all but retired from the public eye after becoming a small thorn in the side of Margaret Thatcher’s government following the Falklands War. Questions in Parliament and an attempted prosecution under the UK’s Obscene Publications Act for their single “How Does It Feel…” led to a round of court battles and what the band describes as harassment that finally took its toll. On July 7th, 1984 the band played their final gig at Aberdare in Wales, a benefit for striking miners, before retreating to Dial House to concentrate their energies elsewhere.

Guitarist Andy Palmer had announced that he intended to move on from the band in order to further his art college studies, and the reported group consensus was that replacing him would be “like having a corpse in the band”. This catalyzed the affirmation of Crass’ consistently stated intention to split up in 1984.

Crass had a huge influence on the anarchist movement in the UK, US, and around the world. With the growth of anarcho-punk came new generations of people who became interested in anarchist ideas.

The philosophical and aesthetic influence of Crass on numerous punk bands from the 1980s were far reaching, even if few bands mimicked their later more free-form musical style (as on Yes Sir, I Will and their final recording, 10 Notes on a Summer’s Day). The band has stated that their musical antecedents and influences were seldom drawn from the rock music tradition, but rather from classical music (particularly Benjamin Britten, on whose work, Rimbaud states, some of Crass’ riffs are directly based), Dada and the avant-garde such as John Cage as well as performance art traditions.

Their painted and collage-art black-and-white record sleeves produced by Gee Vaucher themselves became a signature aesthetic model, and can be seen as an influence on later artists such as British graffiti artist Banksy (Banksy and Vaucher have latterly collaborated) and the subvertising movement.

documentary about Crass Crass: There Is No Authority But Yourself (English w/ Dutch Subtitels)