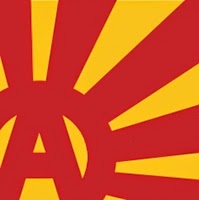 I have been thinking about the idea of "community" lately.  I know that this is a controversial word and that there are many different ideas about what that means (and if it actually exists).  But there is something going on between people, who know each other and are in each others' lives to varying degrees.  Here are some random thoughts that I have been having about this.

How is it that "community" is played out in Santa Cruz, where folks feel connected to each other?  In many cases, this involves something like overlapping concentric circles of social connections.  Where some folks are tight with each other, less so with others (an outer ring) and so on (more and more outer rings).  And often we have folks in our lives that other friends are not as close with, so these circles have a kind of overlapping aspect.  In larger social situations you can see this.

I sense that for some folks, their tighter ring of friends are those they live with, or share resources with, be it in in a punk house or other living situations.  For other folks, this can involve working on projects together, where we are involved in each others' lives because of a common endeavor.  This sense of shared activity, where our well-beings and the well-being of our common project, creates a kind of commitment to each other and closeness.  And the projects are not an end but a work in process.

Because for the most part, we live our lives separate from each other, in dwellings apart from each other, doing-our-doings (be it some sort of work or school or whatever) by ourselves, without a consistent being in each others' lives.  Some folks can feel alone, like community is lacking.  And, yeah, social conditions of this society play a large role in this, where folks live apart struggle economically.  So, what do we do?

I would love to live in a village type situation (and I realize that has some drawbacks as well), where we live in a more connected way with each other, and the land that is our home.  I don't have that right now.  So then what?  I nurture my friendships, that more often than not involve one-on-one hang outs.  What of a more collective sense of togetherness, of mattering to each other, of celebrating together and supporting each other in hard times?  How do I/we nurture this?  While I do have this connection with a larger group in the various projects in am a part of, this does not include all the folks that I deeply care about (and another dynamic I notice, which I plan to write about later, is that as folks get older their focuses shift, to other areas of life, and so they can be less involved in the d.i.y. or radical scene).

So, perhaps these thoughts can be a spark, to ignite ongoing conversations about this.  I know that this is also on other folks' minds as well, especially during the winter time, when the nights are longer and colder and people can go inward (both being inside more and being more personally internal).  I feel that it is vital that we do nurture our connections to each other, as well as be actively engaged in the wider social realm (and that these two orientations can also mutually support each other).  And this can look different ways for different people.

So, now I will get off of the computer to go to the kitchen to see friends before we all set off on our separate ways.