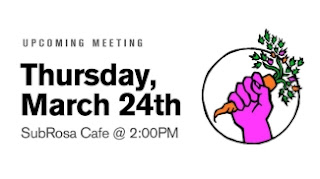 From the Food Not Bombs facebook announcement, "Do you know how fun it is to give away free food? We've been doing it for 35 years, and there's plenty need for your help. Our volunteer needs include things you do on a daily basis – washing plates, cutting vegetables, smashing patriarchy. Join us next Thursday at SubRosa Cafe for our upcoming meeting. We encourage new folks to attend! More info: http://eepurl.com/bUCF5T"  https://www.facebook.com/events/1706929612922841/


Come hang out, enjoy the space, and listen to cloudy slow jamz and R&B (every 2nd & 4th Thursday of the month)

-Monday March 28th, 7:30pm-10pm:  a night of Latinx poets (Angel Dominguez, Elana Chavez* and Tatiana Luboviski-Acosta* and hopefully another local poet) reading/performing new works.  An intimate night of poetry and performance in the vein of previous readings hosted by SubRosa.


*Here's some more information about two of the readers*

Tatiana Luboviski-Acosta is a mixed raced artist from California. Raised between Hahamog'na (now known as Highland Park) and Wenot (now known as Huntington Park) in Tongva territory, AKA the Los Angeles Basin, they now live in Chutchui, Yelamu territory, AKA the Mission District of San Francisco, mere blocks away from the Mission San Francisco de Asís. Depending upon what the content calls for, they work within and between languages. For the past seeming millenia, they've been working on El cuerpo lábil/The Easy Body, a codex on dispossesion, borders, failed revolution, and motherhood.

Elana Chavez is from the Central Valley, she learned to love words with a tiny dictionary with her Abuelo in an old Datsun. She writes poetry and weepy facebook posts. She thinks about going back to school then thinks against it (repeat). She co-curates  Cantíl a POC centered poetry reading series in Oakland, CA where she lives.").  She is currently working on a full length manuscript. 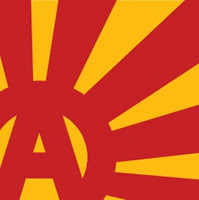 Come drink coffee and eat a scone over a copy of the NYTimes. Discussion on current events sure to ensue along with our Riseup and Shine morning Anarchy community poll.

(and other open hours at 11am, or maybe earlier, with the HUFF meeting at 11am https://www.facebook.com/HUFFSantaCruz)

Also come to SubRosa during our regular open hours!

About the project from their facebook page, "We refurbish old and unused technology and give working computers to local schools, non-profits and community groups. Obsolete or unusable computers are recycled locally using environmentally responsible methods. We have workshops twice a week where people can drop in and use our space and tools to diagnose their computer issues. Want to find a good home for that pentium 4 that's been taking up space in your closet? Need help installing new RAM? Having trouble with viruses or spyware on your laptop? Come on by."

I want to express my appreciation for that project, for the folks that contributed their time and energy (and sometimes money) to provide a valuable service to folks in Santa Cruz (and we at SubRosa also benefited).  Specifically, I want to thank and honor Dan and Robert and Harry...and I know there are others whose names I don't know.  Today, seeing the space now emptied I felt the bitter-sweet pang of appreciation and loss.

I also embrace change...and welcome The Fábrica to the larger formerly-Computer Kitchen space.  I look forward to the new possibilities that will emerge with this change...for PedX as well (which shared its space with The Fábrica and will soon have a new neighbor).