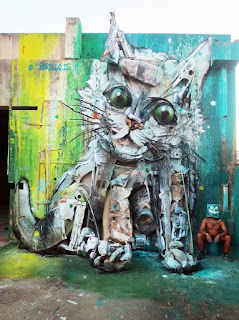 No money. No trades. Everything is free! This market is based on a gift-economy and thinks capitalism is terrible. Bring food to share. Bring your special items that you don't use but can't throw away (ex. clothes, toys, art supplies, instruments, books and zines...your free box). Bring your special talents to offer people (ex. haircuts, message, reiki; we can help you set up if you let us know before hand). Come and take what you can use. We will have folks to check in with as you arrive. First come first served, space may be limited. Requirements: Mutual respect. If you bring things, you are expected to take away whatever is left at the end of the market.  https://www.facebook.com/events/203140640267558/

come cry at this show ! songs beautiful beyond words guaranteed to make u weep a tear or two ♥

AND REMINDER ABOUT REGULAR OPEN HOURS (Come on by and have some coffee, check-out a book or strike up a conversation)
Wednesdays  from 10:30 - 2pm // Fridays from 9am - 12pm // & open for events & meetings 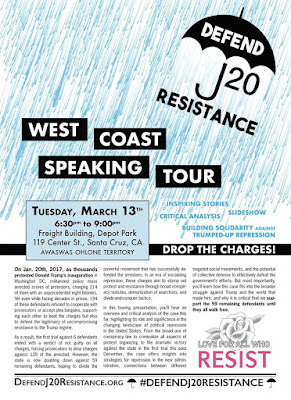 On January 20th, 2017 at the massive protests in Washington DC against Trump's inauguration, militarized police attacked and mass-arrested over 200 protestors at an anti-fascist, anti-capitalist march, charging 214 of them with an unprecedented eight felonies.

The first trial against 6 defendants ended with a verdict of not guilty on all charges, forcing prosecutors to drop charges against 129 of the arrested. However, the state is now doubling down against 59 remaining defendants.

In this touring presentation, you'll hear an overview and critical analysis of the case this far, highlighting its role and significance in the changing landscape of political repression in the United States.


***Not a Hub project but this event at the MAH is still a part of encouraging sustainable living: "You are invited to attend an informational forum, Creating an Employee Ownership Succession Plan, at the MAH on Thursday, March 8 from 7-9 PM. Featuring a panel of speakers followed by a Q and A, this community presentation is organized by Co-op SC, a local group dedicated to educating our community about the effectiveness and potential of worker owned businesses. Co-sponsors include Think Local First, Economic Justice Alliance, and Santa Cruz Community Ventures, with support from Community Printers and Democracy at Work Institute." More info at https://www.facebook.com/events/153272682153140/