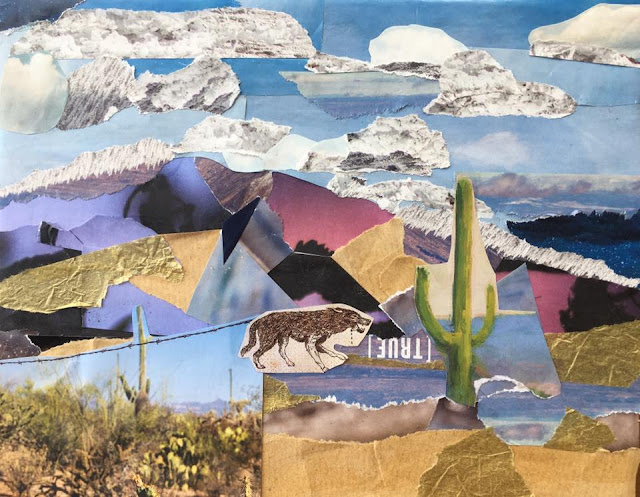 Art show for December is entitled: Angry Black Girl Magical Realism / An Art Installation by Whitney Sparks and come to SubRosa on Friday, December 7th at 6pm for the art show opening!

-Ancient Future ~The Noose as Umbilical Cord ~ this collection of mixed media artwork from 2018 explores the cosmic realm of ancestral knowledge as a powerful magical and/or spiritual force of Blackness that can land on Earth in healing shifting ways/waves for their descendants in the Diaspora.

-Migrating Womxn ~ portraits of people traveling in the caravan made to uplift their struggle and above all to RESIST the dehumanizing agenda that threatens their lives. ALL proceeds from these portrait sales will go directly to support the caravan refugees.

-Mixed Messages ~Collage postcards by yours truly from around the world. Get $5 off a yearly subscription to these original works of art for 2019 by ordering with the code SUBROSA via whitneysparks@gmail.com, before January 1.

Each week we will highlight a specific prisoner, have info on their story and struggle, and have a list of political prisoners to write. Use this time to find a new prisoner penpal, to continue a correspondence or write to someone you know inside. We have materials and stamps but please bring paper, pens and stamps if you like. Some snacks provided.

SubRosa and community members are having their first meeting.  All are welcome!!! The people of Rojava are engaged in one of the most liberatory social projects of our time. Please join us for the first meeting of Rojava Solidarity Santa Cruz. Let's build a community of interest to learn more about Rojava and provide support to its people!
What began as an experiment in the wake of the collapse of Assad’s forces in northern Syria has become a stateless federation of autonomous councils and collectives. What began as a struggle for national liberation has resulted in strong militias and defense forces, the members of which participate fully in the unique social and political life of their region. What started as a fight for the Kurdish people has resulted in a regional home for Kurds, Arabs, Syrians, Arameans, Turks, Armenians, Yezidis, Chechens, and other groups. What began as the hierarchical Marxist-Leninist political party, the PKK, has evolved into what its leader Abdullah Öcalan calls “Democratic Confederalism,” which is a “system of a people without a State,” inspired by the work of Murray Bookchin. What we see in Rojava today is anarchism in practice. https://www.facebook.com/events/333492060581294/

SCHC brings you a relaxing evening with...


AND REMINDER ABOUT REGULAR OPEN HOURS