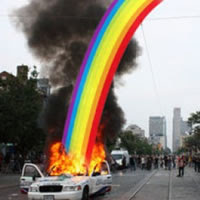 Radiation City- The calmed echoes of amplifier tubes and secret gramophones, the soothing, sonic smile of a warbling Wurlitzer, and precisely sparse heart-throbbing drums bounce from the analogue souls of our newest musical Ozzy & Harriet. From Portland
buffalobuffalobuffalobuffalobuffalo- a lady fronted pop-punk band from Storey House. From Santa Cruz.
And Maybe More...

HUFF meeting from 10am until noon. HUFF is Santa Cruz's oldest and most stubbornly persistent grass roots homeless advocacy group. We make trouble for the powers that be and fight institutional human rights abuses such as the "blanket ban": a Santa Cruz City Council law prohibiting homeless mothers and children from covering up with a blanket between the hours of 11 p.m. and 8:30 a.m.

-Saturday Mar. 31st- Insurgent Theatre is touring with "In the Belly", a play focusing on issues of prison abolition. 8pm

In the belly is where things digest, where they are broken down so their value can be extracted. This is where things are made to rot. If our
society is a beast, its belly is... the prison system. This work from Insurgent Theatre seeks to manifest imprisonment on stage, overlays it
with critical analysis of the system, and follows up with in-depth discussion about abolishing prison in America.

This show contains nudity, violence and other sad realities of the US prison system.

We will communicate with prisoners, as well as each other, in order to begin to build a community of support locally and nationally. The focus will be LGBTQ prisoners, but not limited to. We will explore current and historic issues within the United States prison system, and intersections of race, class, gender, sexuality, etc. in a penal state and the ways that people can resist. Extended commitment to your pen-pal is preferred. Anyone not respecting the safety of those in correspondence or around them will be asked to leave. Requirements: A willingness to forget previous biases.